The Langtang mountains form a backdrop to Kathmandu and can be reached by an easy day’s drive from the city. From a logistics viewpoint, it is the easiest of all the Himalayan treks to organise. However, this area is largely unknown to all but the most ardent of mountains trekkers. The ice-hung peaks of the Langtang Himal are seductive in their beauty, the valley they overlook is an enchanting place running east-west, parallel with the Tibetan border.

There are no internal flights to worry about, the passes are not too high (at least by Himalayan standards), and the district is well served with lodges and restaurants.

There are no famous names among this mix of 6000 and 7000m peaks. The range lies between the Ganesh Himal in the west and the Jugal and Rolwaling Himal’s in the east and was first visited by Bill Tillman in 1949. Guides are still needed though as tracks are sometimes difficult to follow. It was here that Australian trekker James Scott was lost for 43 days in the winter of 1992.

With a daily mix of challenges and rewards, the route through the Langtang makes a near-perfect introduction to the Himalayan trekking experience. 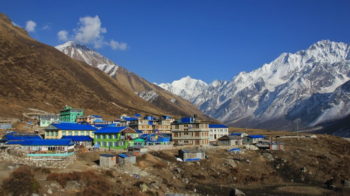