Having lived in a remote area of Nepal for five years, when I moved to Kathmandu in 2000 it was good to have access to something of a ‘nightlife’ again! However, Kathmandu of the early 2000’s was very different from today. The Maoist/ Government conflict reached its peak around 2001, particularly after the Royal Family was massacred in June 2001, and there were a lot of curfews and restrictions at that time.

Although Thamel has been around for decades, there were less bars and clubs back then. In general, I remember having to go to the big, 4 star hotels which would periodically hold DJ parties with Bollywood and Western music. Those were fun nights with everyone coming together with one mind.

Probably it was around the mid 2000’s (the conflict ended in 2006) that more music venues and clubs started to appear in Thamel and nearby. The one I frequented the most was the Irish Bar in Lazimpat which was a late night venue with live music two or three times a week. The atmosphere was still very friendly and it felt like a close knit community of music lovers of different ages.

In the early 2000s also came the first Jazzmandu Festival. That was something very new and special for Nepal! I would say for the first 2 or 3 years of this annual festival, mainly expats attended. There was already a jazz bar in Lazimpat (Jazz Upstairs, which still exists) and the owner of that bar and the drummer of the only jazz band in town were the ones who started the festival. In 2007 the Kathmandu Jazz Conservatory opened up and changed the music scene in Kathmandu forever!

Today along with the, let’s call them “Thamel bands” (who play rock numbers to various degrees of competency) there is now a number of excellent bands in the jazz/ funk/ blues genre.

These bands do play in Thamel but their gigs are usually around Sanepa/ Jhamsikhel and other areas of the city.

Also, as time went on, with the introduction of bigger and more fancy clubs and with the end of the conflict and with tourists coming back to the country again things changed quite a bit. Clubs became more exclusive and the atmosphere became less family like and more competitive – clothes, ability to spend money, etc.

Periodically the police decide that we all should get a good night’s sleep and close things down at 10 or 11pm. At the end of 2015 it was decided that Thamel could stay open 24 hours. Great timing – winter season, so less tourists, locals not coming out due to cold and a fuel shortage! However, right on form, this policy was cancelled in time for the 2016 spring tourist season when they announced music should end at 10pm. At the time of writing, however, most of the bars are opened till 12 or 1 am. And clubs are open to 2 or 3 am.

Update 2019 September: The night clubs the whole night in Kathmandu

So, you just never know – when you visit will you be able to listen to good bands and hang out in restaurants till midnight or will you be forced to head home at 10pm?

But either way, today you can find pretty much what you like in Kathmandu in terms of music, clubbing, and dining. 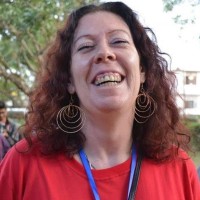