With the opening of Lukla Airport (often referred to as the Tenzing-Hilary Airport) in 1964 it was no longer necessary to trek in from Jiri, and trekking to Everest Base Camp became easier, with less time involved.

As an alternative to the 6 main Everest trekking routes described below, you can proceed from Lukla Airport to the following unique areas:-

From Namche, head east from Chukung via Sherpani Col to Makalu, the 5th highest mountain in the world. See the details of the Makalu Region.

From Namche, head west from Thame via the Tashi Lapcha Pass to Tsho Rolpa Lake in Rolwaling Valley, legendary home of the Yeti. See the details of the Rolwaling Region.

The following six treks are the most popular treks in the Everest Region:

As the name suggests, this trek begins and ends by flying in and out of Lukla Airport and is the most popular route in the Khumbu. Acclimatization at Namche (3,440m) is a must before hiking on to the higher altitudes at Tengboche (3,870m) and Dingboche (4,360m). Another acclimatization day at Dingboche will ready trekkers for Gorakshep, Everest Base Camp (5,380m) and the viewpoint at Kalapatthar at over 5,500 meters.

Check here for more information on the Everest Base Camp Trek.

Like the Lukla Everest Base Camp Trek, this shorter, 7 day, trek starts and ends at Lukla Airport.  Unlike the Lukla Everest Base Camp Trek however, it is at lower altitude, never rising above 4,000 metres and does not have the same challenging ascents and descents. An acclimatization day is still required at Namche Bazaar (3,440m) which gives trekkers time to explore this bustling market town. Time is also spend around Tengboche Monastery with its spectacular views of Mount Everest, Nuptse, Lhotse, Ama Dablam and Thamserku. This trek is particularly suitable for all age groups and for those who have less time to spend.

Check here for more information on the Everest View Trek.

This challenging trek is the toughest among the 6 Everest treks mentioned here.  The reason can be found in its alternate name – Everest High Pass Trek.  This trek takes hikers over three high altitude passes –  Renjo La Pass (5,465m), Cho La Pass (5,420m) and Khongma La Pass (5,535m), as well as to other well trodden places such as Everest Base Camp, Tengboche Monastery and Gokyo Lake.  The trail makes a circuit route from Namche Bazaar and can be done either clockwise or anti-clockwise. The starting and ending point is flying in and out of Lukla.  A high level of fitness is required to endure the long days (up to 9 hours) and strenuous ascents.

This demanding trek is a good alternative and less travelled trail than the Everest Base Camp Trek, which it follows until Namche Bazaar when the trail heads straight north.  Gokyo Lake is actually six lakes located at 4,700 to 5,000m in the Gokyo Valley in the Sagarmatha National Park area. As well as this stunning Ramsar site, scared to both Hindus and Buddhists, another highlight is Gokyo Ri (5,357m).  The steep climb to Gokyo Ri is rewarded by stunning views of Mount Everest, Cho you, Lhotse and Makalu, all four over 8,000m high. This trek starts and ends with flights in and out of Lukla.

Check here for more information on the Gokyo Lake Trek. 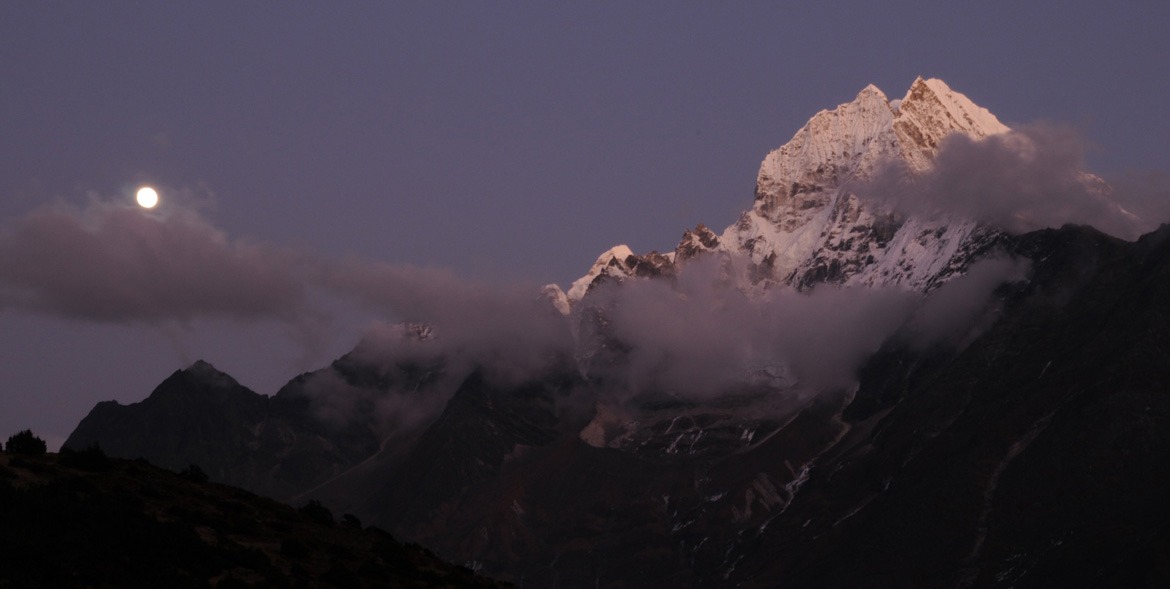 This trek combines all the sights and wonder of the Everest Base Camp Trek with the Gokyo Lakes and crossing the high altitude Cho La Pass (5,330m).  With some long days of 8 to 9 hours, this trek is perfect for those with a high level of stamina and a sense of  adventure.  This trek makes a circuit from Namche Bazaar and can be done either clockwise or anti-clockwise, with the majority of people going anti-clockwise. This means heading for Everest Base Camp first then on over the Cho La Pass – being the toughest part with high winds and a very early morning start –  to the lakes. This trek also starts and ends with flights in and out of Lukla Airport.

The Jiri to Everest Base Camp trail was established long before the arrival of air transport in the Everest Region and follows the footsteps of Tenzing Norgay and Sir Edmund Hillary. In fact it is often referred to as the ‘Classic Everest Trek’ or the ‘Tenzing Hillary EBC Trek’.  The trek starts from Jiri Bazaar, approximately 8 hours by road from Kathmandu, and takes a minimum of a week to reach Phakding before setting off to Namche Bazaar and base camp proper. Including Gorakshep and the Everest view point of Kalapatthar, this is quite a demanding trek with altitude up to 5,554m.  That, and its long duration means a good level of fitness and stamina is required.  On the return, trekkers can fly out of Lukla instead of repeating the hike back to Jiri.

Create your custom-made trek to Everest