Upper Mustang, The Last Forbidden Kingdom of Lo Manthang and Consequences of Earthquake for Trekking.

I came to knew that the area had faced minimal damages after the earthquake, few unmaintained old monuments collapsed, some developed minor cracks including the wall of the king’s palace in Lo.

During the mid monsoon my friend and I, we went there. We started our trip on 25th of July 2015. Instead of regular trekking, it was a road trip on a motorbike. Also was a very short trip, we finished entire trip, i.e. Kathmandu – Lo Manthang – Kathmandu in a single week. I was surprised to saw despite of the devastating earthquake, Upper Mustang had remained totally intact.

Yes, it was excellent for the trek. In reality, trekkers’ flow was high; we encountered with few big size groups on their way up. Initially, we had a plan to trek Damodar Kunda as well; as a part of this hike, tent and mattress were included in our backpack. However, the plan was changed, and we decided not to hike Damodar Kunda. We leave our tent and mattress in the village of Jomsom. Jomsom, a district headquarter of Mustang.

From Kathmandu to Pokhara, everything was perfect so far. The plan was to reach Beni same day starting from Kathmandu. As monsoon was doing its work, suddenly black clouds dominate the northern sky of Pokhara and we decide not to drive to Beni.

On the very first day of the road trip, we stayed in Pokhara. Next morning we started pretty early, and we continued our journey to Kagbeni. There were few landslides, and peoples were busy renovating the road. It was slightly diverted in a few places, next to the bank of Kali Gandaki River. Personally, I don’t recommend going through road to Jomsom; it could be far better with the flight.

We stopped in the Ghasa for lunch. Rupche Waterfall, a big obstacle for the bike and jeeps. It was so big that it was impossible to drive through the waterfall. We paid USD 8 for the five locals to carry the bike to the next side and that works. Because of this delay, we couldn’t reach Jomsom in time. And we again changed the plan, overnight stay in Jomsom instead of Kagbeni.

We crossed the bridge and stayed in Old Jomsom Town. The road beyond Ghasa was perfect for the ride. Good enough for two-wheelers!

I forget exactly how long it took for us to reach the village of Samar from Jomsom. We were there for the lunch. The first hotel in Samar, we had really good Dal Bhat there. Owner of the hotel had warned us about the difficult portions of the trail.

Our aim was to reach Lo Manthang at any cost. So we took his suggestion very lightly and continued our journey toward the last forbidden kingdom. It was a long day, as we had reached Lo Manthang late afternoon, around 6:00 PM. “Lotus Holiday Inn”, it was a teahouse in Lo Manthang recommended by the owner of the hotel in Samar.

That was a very nice hotel, and I also recommend that to anyone. We were so tired, at the dinner time we encountered a german couple. Same like us, it was their first day in Lo. They shared their plan and invite them to join. Two hippies were adopted in Lo Manthang?

Next morning we went to explore three major monasteries of the village. There was a huge clay fence, circling the entire village. According to the hotel owner before it wasn’t allowed to build the house outside of the fence. But with increasing population, they started building houses outside the boundary of clay fence. Hotel owner, accompanied us for the trip to the monastery and described the entire historical aspects at his best.

We also meet an Italian Artist, who had already spend seventeen years in Nepal. Currently, he was leading the team of painters, their mission was to renovate the painting inside the monasteries. It was a long project and the Italian guy he speaks very fluent Nepali and Local Language as well.

Next day horses were arranged for a round trip to Choser from Lo. We paid USD 18 for each horse and it was an eight hour trip. We explored Choser Cave and two other monasteries near by. Same day we drive back to Samar.

From Samar we started very early in the morning, for lunch we stopped in Ghasa again. Probably we were familiar with the road, it was very fast drive back down. There was a problem on the river in between Kagbeni and Jomsom.

Because of the continuous five days of rain, we were not able to cross the river with the bike. A local bus driver helped us. It was cloudy with patchy drizzle when we were about to reach Pokhara. Though long we enjoyed the day at our best. We went to the Busy Bee for the dinner. Busy Bee, one of the most recommended bars in Pokhara. We shared a large size pizza for the dinner.

On the last day, we drive back to Kathmandu. It was a pretty easy ride. Nepal is safe after an earthquake. There is still a lot of places to go for the adventure! My friend is planning for Manaslu and Everest Trek, keep checking updates on the blog. You can start planning Upper Mustang Trip during the Tiji Festival 2016. I want to go there again during the Tiji, let me know if you are going! We could hike together. 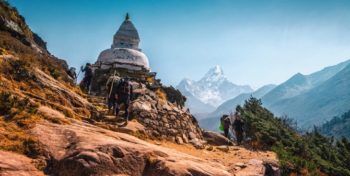