After Everest one other Nepalese peak has become synonymous with high adventure – Annapurna. Superlatives are insufficient to do justice to its seductive trails, sublime scenery, and the fascinating culture of this magical massif.

It’s no wonder that avid trekkers and mountaineers are drawn to these mesmerising peaks. In his 1947 anthology “The Mountain Top” Frank Smith summed up the appeal of trekking when he wrote: Escape from the shell of your small affairs and tread for a while those mysterious paths of the spirit that lead nowhere and everywhere. Then you will know beauty. Such is the essence of the Annapurna’s.

Taken from an ancient Sanskrit name for the goddess of plenty, Annapurna is not one peak but four numbered in order of height. These giants are engaging in all their moods; at dawn, they are bathed in soft hazy light, but soon clouds drift in, leaving the jagged spired floating like benign ghosts.

Throughout sunset they are cloaked by fiery demons, at night they shimmer in the moonlight. Sometimes storms engulf the rampart, while at other times they’re reflected as a vision of earthly serenity in the cool waters of a lake.

Magical Nepal invites you to join us on one of two classic treks in the region; The Annapurna Circuit, and the Annapurna Sanctuary.

The range of sights on the circuit is astonishing: terraced hillsides, dense jungle, humid bamboo clumps, and canopies of cloud forest, dank eerie woodlands, and silent alpine glades. Quaint farmhouses dot the landscape, while women in brightly colored sari’s wash clothes by the river. Elsewhere a Hindu god may catch your gaze with a smile of encouragement.

The Annapurna Sanctuary trek requires you to imagine an almost complete ring of high peaks, six of which top 7000 m and one – the enigmatic Annapurna gracing 8000 m.

Picture this immense amphitheater hung about with glaciers, plastered with snowfields, buttressed by massive walls of rock that erupt from a basin of old moraines and raunchy streams. Dream, if you will, of a silver moon lighting the scene, of sunrise staining summits, of mist thickening to clouds that slowly fill the basin. And the last summit to be swamped by it all is one of the most charismatic:

Machhapuchhre, the unmistakable “fishtail” peak, guardian of the Annapurna Sanctuary and seducer supreme. Everywhere you turn is a bounty is visual excellence. Wilfred Noyce the acclaimed poet-mountaineer concluded his book on the attempt of Machhapuchhre with the words; “If there be a paradise on earth, it is now, it is now, it is now. 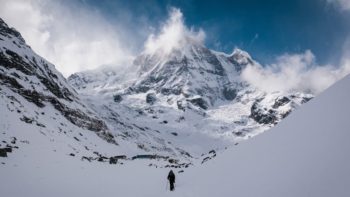 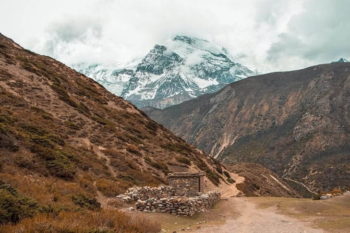 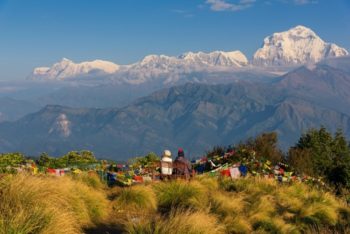 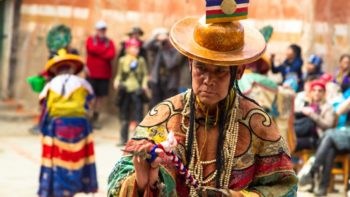 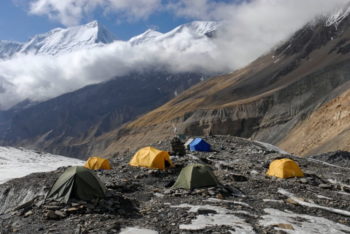 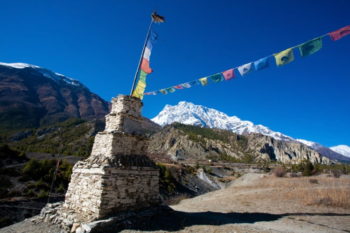 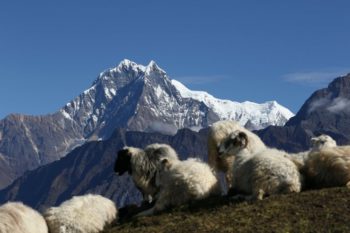 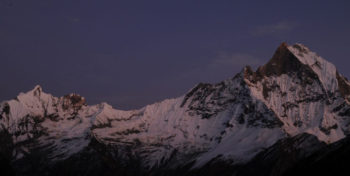 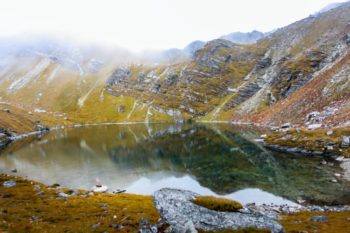 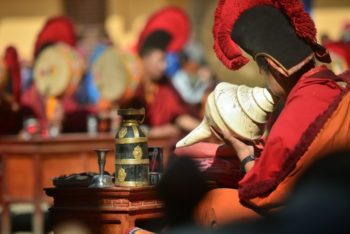 Nepal is probably the ultimate destination for climbers. With 8 of the world’s highest peaks, that is peaks over 8,000m, and of course the highest in the world, Mt Everest, Nepal is every mountaineer’s dream. This popularity started of course when Sir Edmund Hillary and Tenzing Norgay reached the top of Everest in May 1953. Although there had been attempts earlier, this achievement drew world attention to the country. With over 1,300 peaks above 6,000, and with over 300 of them available to climb there is something for every level of mountaineer. Naturally no one starts at the top, so to speak! We find the majority of climbers coming to Nepal have at least some experience of Alpine climbing in other countries. For those who have trekked extensively at altitude, Nepal has some great trekking peaks where those with little or no climbing experience can cut their teeth.

In general, trekking and climbing peaks are regulated by the Nepal Mountaineering Association who issue permits for climbing all peaks up to the height of 6,400m (Mera Peak). For expedition peaks, the permits are issued by the Department of Tourism. There are currently 326 peaks open for climbing, which include 20 which are royalty free. Of these peaks, 22 have the condition that they are open for only Nepalese expeditions or joint Nepalese/ foreign expeditions. And there must be at least 3 team members who are Nepalese. Again there are further rules applying to 4 expedition peaks which require the peak to have already been submitted by a Nepalese team or a joint Nepalese/ foreign team.

Yes the rules can be a little confusing but we at Magical Nepal can keep you on the right track and obtain the correct permits for your team! In this section we provide you with information on some of our favourite expedition peaks.